Here is a filmed interview with me showing the work installed that was done just before the opening at Mosman Galleries. Julie Petersen from the gallery did a great job of filming and editing.

The syndicate opened at Mosman Art gallery on 18 May. It was opened by Anita Taylor who's the director and CEO of the National ArtSchool. In her speech she was extraordinarily insightful for having visited the exhibition without any commentary from me or the staff as far as i know. She spent a generous amount of her speech interpreting and analysing the work showing extraordinary making some knowledgeable references. I was flattered by many of the things she said.
The art school that she represents is one with a great tradition and  history that has produced some fantastic artists. There are many parallels with the art school I studied at, Claremont School of art.
My show opened with a solo show by Ken Done titled 'Attack' which commemorated the 1942 attack by the Japanese midget submarines in Sydney Harbour,   it's 70th anniversary.
Quite contrasting shows of course but visitors to either show enjoyed both exhibitions sometimes with quite a surprise at the quality of what they saw.
I had spent a few days before the exhibition helping set up the sculptures. This was due to some difficulties with the galleries renovations that meant that I had to supervise the unpack of the works. Another complication to this was that I had just had a motorcycle accident a few weeks before, breaking my neck and right arm, so I was pushing things a bit to be there in Sydney.
As difficult as that was, i was really glad that I did get the extra time to be there. The show looks fantastic and a great video was shot by Julie Patterson interviewing me about the show, she did a great job editing it and published it on the Mosman art Gallery website.
While in Sydney for the show I was assisted by my sister Rebecca to help me get around to various exhibitions and galleries.
In particular, I saw the refurbished in MCA, and a fantastic pop-up ARNDT contemporary art Gallery in Kent st showing my friends' entang Wiharso's work as well as some extraordinary other Indonesian contemporary artists alongside European luminaries like Sophie Calle and Bill Viola.
I also saw the White Rabbit gallery showing mostly contemporary Chinese art and the AGNSW exhibiting the Archibald, Wynne and Sulman art  prizes. What I most enjoyed at the AGNSW was the John Kaldor  collection in the new wing.
Posted by SimonGilby at 5/21/2012 11:42:00 am No comments: 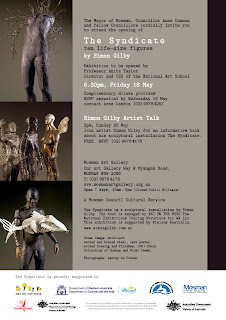 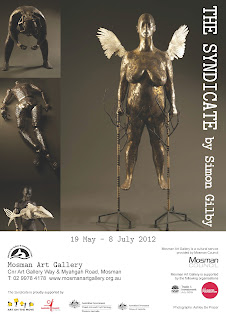 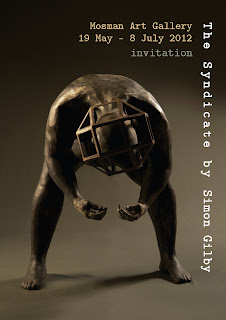 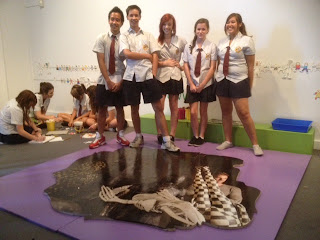 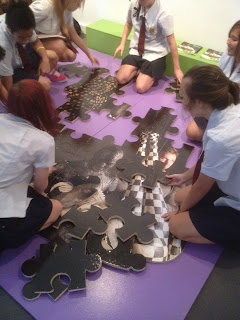 Perc Tucker is the regional Gallery of North Queensland, housed in a  beautiful two-storey colonial building with surrounding wide verandas and containing large galleries. The syndicate show was held downstairs and the whole gallery team led by Manager Francis Thompson did a great job of making the exhibition look good. This was the first time where the works were shown across two adjacent spaces but the considered placement of the works ensured the show hung together well. The syndicate Exhibition made up the centrepiece of an event called ‘Xtrata Go Figure’ that included other artists, such as Sally Smart and small scale sculptor Zygmunt Libucha making up a whole program around the ‘Human Figure’.
In part of the gallery next to my work there were some interventions done by schoolchildren that in fact worked really well. Drawings, cloth collages and a big jig saw puzzle of the Syndicate poster image.
The opening was great and well attended. Jak Henson the Exhibitions Manager was particularly helpful with promoting the exhibition and a artist in her own right(Exhibiting in last years "Strand Ephemera").In fact the whole team were great and made me very welcome.
I had the good fortune of meeting Tate Adams, a senior artist, printmaker originally from Ireland, he moved to Australia, initially  Melbourne, teaching exhibiting and running the ‘The Crossley Gallery  He later established with his ex student George Baldessin, ‘Lyrebird Press’, publishing Artists Books he then moved up to Townsville.
Tate’s continues to be extraordinary vital artist that continues to produce beautiful large scale black Gouaches (on display at Perc Tucker with my work.), as well as  the short runs of artists books including Jan Sensberg and John Brack.
I had some great meals together with Tate and Frances, especially entertained by Tate’s stories of art making over his art practise over 60 plus years.
Thanks to the generosity and professionalism of the Director and her team, the beautiful town with its great climate, I found myself feeling I could spend a much longer time there.
The public talks had a great response from the general public including the local schools, local artists and the TAFE’ so did I quite a few talks there.